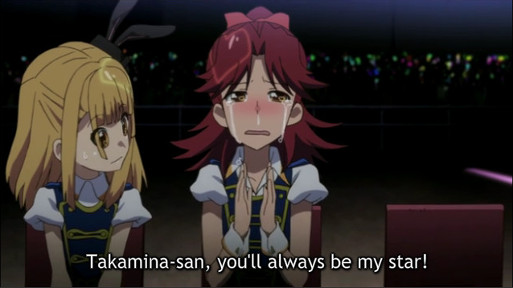 (Actually I haven't even completed reading, the post is far too long to finish it at work.)

For lights, I did have a KB on me because ultimately I don’t have enough UOs. While I stayed away from it on day one, I noticed there were a ton of people using it anyway, so it emboldened me to use it on day 2. For those of you who are unfamiliar with IM@S, the concerts actually “forbid” you to use AAA, AA or LR20-powered lights. Nobody was enforcing this, but most Ps adhere to this. In the end it was still kind of annoying as way too many songs require using multiple sticks. I’m just not well-practiced enough to handle them. I remember busting out all 13 lights for the first two songs and realized quickly that it’s foolish LOL. Yeah, I ended up dropping one and my next-door neighbor picked it up.

I also dropped a light on day two, when I was only using 6 lights for the first two songs. So go figure. I recommend no more than 8 if you want to just have a good o’ time doing it. It doesn’t matter if you are using i-lights or normal v2 penlights. In some ways the v2 lights are an easier grip because there’s more contact area and it’s easier to space the lights within the same two fingers than the i-Lights.

Is this great or what?

You wouldn’t know this is the last song of the medley because Juri just stands on center stage as if she owns it. Being the one song she performs all the time, she’s gotten quite good at it, I think.

I could swear to anything that Kotori has 2 sonds now (not even counting ID:[OL]), but I cannot remember what the other one is... Wiki suggests that she has 3 more!

OKAY! A 765Pro song to restore order, because this crazy-butt CG music was only fun for so long. Little did we know this version of ALRIGHT* is so powerful because Azumin teared up for a good chunk of the second stanza. In fact, she was on the edge of it in the first stanza. Needless to say everyone called out her name during that giant gap. I sure did because her half-tearing, half-happy face is so compelling!

Oh good grief. What if she tried to sing Koi?!

When the light came on from the main stage I was not quite sure what the hell was going on, other than that we have a new person. And would else could it have been? Haruka Tomatsu has a very recognizable profile because her body proportions are really weird. She walked up with the backup dancers across the cat walk and then I was like, OMG it’s the REAL DEAL. As if the recognizable face on the jumbotron hasn’t confirmed it, anyway. [...]

Oh my tears of myrth!

Since I returned from the trip I started playing Million Live. It’s a dumb game; don’t play it.

Two things: 1) I'm wondering if he managed to do it without a Japanese cellphone, because Gree cut me off, and 2) ohhhhh yessss.

UPDATE: Regarding the sempai/kouhai thing, I thought Omo was blogging before Ani-nouto started. He managed to lose his archives and changed domain since then, so it's not like the unwavering presence of Karmaburn, but the first link at Ani-nouto was in June 2007, to omo.serenana.info.