As a part of pre-broadcast hype, a new PV came out, and a massive interview (translated in thesii). They cause some concern: the new anime is no different from the old one.

Something like that happened before: I dropped GBF TRY after 3 episodes. As much as I loved the original, what is the point? Re-heated leftovers could be tasty, but they risk to have trouble competing with other dishes.

It does not have to be this way. For example, K-ON 2 was quite worthy despite its heavily derivative nature. But the CG seems stacking poorly, especially since they gave us some hope initially.

Back in September, when they admitted to making an anime, Uzupaka was announced the officially blessed main character. That strong focus was supposed to make the new series different. Sure, Shiburin and Mio Honda were in too, but supporting. But now it's 14? And they are having 20-hour committee meetings to flesh out each of them?

Of course the new series will differ in the small, just as TRY differs by, say, having a 3-person team instead of 2-person team. For example, they need to maneuver around The Producer. He is heavily hinted by the "zeroth" and first PVs, and Chihiro (Kotori of 346PRO) even addresses him directly in the latest PV. But the latest interview claims that the CG is set in the same world with 765PRO, so they cannot borrow him as-is. And the new company is headquartered in a "castle", not an office with masking tape on windows. But big deal. I am still very concerned.

UPDATE: Omo says "worrywart IMO". And yeah, as Russians used to say: "everything is nothing when compared to The World Revolution".

UPDATE HARDER: Omo followed up with a whole post. As much as I can discern, his reasoning follows thus:

I’m not sure there is any real reason to assume we’ll get a GBFT, mainly because unlike those two shows Derem@s is just a different concept to begin with.

But how exactly is it different? Only different by being made from scratch:

I think he demonstrated the fundamental weakness of thinking by analogy more than he did the difference between iM@S TV and iM@S CG. Okay, it is baked fresh. Not a leftover. Is it going to be any different in design? I'm leaving aside the ludicrous claim of being different in concept, which he pre-emptively demolished himself by "can’t take the idol out of IM@S". I already mentioned the superficial differences that are inevitable. But that is not enough.

When the work is created with conviction and can stand on its own, I don’t think it’ll be a problem at all.

I wish I could share the Polyanna view, but with GBF TRY is still in broadcast, the wound is too fresh.

UPDATE EVEN HARDER: "For character-driven enterprises, having very different characters necessarily means they are going to be different in a non-superficial way." 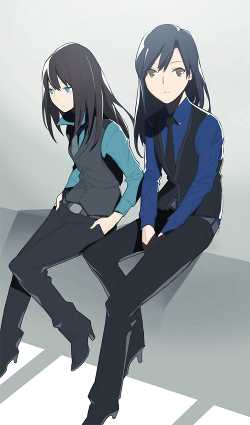